The Lies They Tell by Gillian French ~ Review 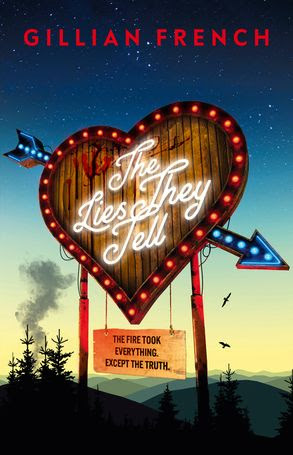 The Lies They Tell

THE FIRE TOOK EVERYTHING. EXCEPT THE TRUTH.

Everyone in Tenney's Harbor knows about the Garrison tragedy. An unexplained fire. A family of five reduced to one. And no leads on who did it. Of course, all fingers point at Pearl Haskins's father, the caretaker of the property, but she just can't believe it. Leave it to a town of rich people to blame 'the help'.

Then Pearl meets Tristan, the last surviving Garrison, and his group of affluent and arrogant friends. Though she's repulsed by most of them, Tristan's quiet sadness and sombre demeanour intrigue her. Befriending the boys could mean getting closer to the truth, clearing her father's name, and giving Tristan the closure he seems to be searching for. But it could also trap Pearl in a sinister web of secrets, lies, and betrayals that would leave no life unchanged ... if it doesn't take hers first.


From the author of the acclaimed debut novel Grit comes a dark and twisted mystery that will have you on the edge of your seat until the very final page.

Tenney's Harbour in Maine is a small town, with few locals, but during the summer the rich arrive in droves to stay in their holiday mansions. When one of the well renowned families, the Garrison's, were burnt to death along with their home, the small town was thrown into confusion and suspicion. All but one remains of the Garrison's, Tristan, who had not been there on the fateful night that his entire family burnt.

It seemed everyone felt fascination-meets-revulsion in Tristan Garrison's presence...

Pearl Haskins is one of the few permanent locals. She has a personal interest in the Garrison case, as her Father was the caretaker for the family until that fateful night.

In a small town where rumours travel quickly, and having been the only surviving witness to this atrocious crime (where nothing like this has ever happened before) has caused difficulties for the Haskins, as her Father is treated with cautious suspicion by all.

Pearl sets out to clear her Father's name and find the truth behind the suspicious circumstances of the Garrison fire, but in doing so she has placed herself in imminent danger as the culprit has never been found or brought to justice, and he doesn't want to be found out.

This book was an enjoyable introduction to Gillian French's work.  It had me captivated from beginning to just shy of the ending. The characters were complicated and it was interesting to read as French peeled back layer after layer throughout the book. I did find some unnecessary characters, like Reese and Indigo...was there a point to them?

Gillian's plot was well laid out and the clues were great. I did find some parts of the book unnecessary, but that could have been a bit of impatience on my behalf, as I wanted to get back to the main plot line. I thoroughly enjoyed the journey but the conclusion fell flat for me, which  brought on frustration as this book was filled with potential! It wasn't the WHO but rather the depth behind the murders.

The Lies They Tell by Gillian French is a captivating mystery thriller that will have you guessing till the final page. A cast of complicated teens with varied upbringing really takes this novel's mystery into a different level. Gillian French truly takes her readers to Tenney's Harbour, trying to navigate the lives of these complicated individuals, whilst trying to solve the mystery, that may or may not be staring at you in the face.