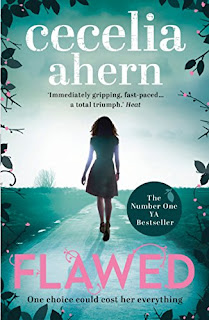 In her breathtaking young adult debut, bestselling author Cecelia Ahern depicts a society where perfection is paramount and flaws lead to punishment. And where one young woman decides to take a stand that could cost her everything.

Flawed is Cecelia Ahern's first venture into Young Adult, and being a huge fan of Ahern's, I HAD to read this and was not at all disappointed, I devoured the book, and rushed out to get Perfect (review coming soon) which is book 2 of this duo-logy.

Flawed is a dystopian novel set in the future, where the world values perfection. This world has a Government body, The Guild, that judges people for their ethical and moral conduct. The system is like a criminal justice system but this is solely for moral judgements.

When found Flawed you are an outcast from society. Firstly, there's the labelling aspect, as a Flawed you must wear a red armband with "F" on it, to let the entire world know you are Flawed, and if that's not harsh enough, you are also permanently branded with a hot stamped iron, different offences are stamped in different parts of the body e.g. if you have found to have lied you are stamped on the tongue. Once a Flawed your job prospects are slim, you must stick to a Flawed diet, curfew and only shop at the "Flawed" aisle of a supermarket, so as a Flawed you are very much segregated from the rest of the community.

Flawed is a fairly fast paced novel, and from the first chapter we are introduced to the Flawed system, and shows its readers that no one is exempt from being found Flawed, regardless of class or associations, you can potentially find yourself being labeled as a Flawed. Within the first 5 chapters we are fully immersed into the novel's plot.

Celestine North is our protagonist, and she was not a likeable character in the beginning. I believe Cecelia wrote her character to be like this firstly to cement that anyone can be found "Flawed", and secondly to show the growth of her character. By the end of the book, I not only liked her, but I found myself really rooting for her cause, she was definitely an unlikely heroine, but through the book she finds her self and where she fits in this strange world.

I also enjoyed the character growth of the secondary characters. I make a special mention of it because for me, this was the part where Cecelia Ahern's writing excelled at in this duo-logy. The changes that took place within each of her characters were amazing, and also realistic. Even the worse character, whom you think are just plain evil, all have a past and you get an insight into why their character developed as it did. I really enjoyed this aspect of the book.

I also found the world extremely intriguing, although I felt that we should have received a better background story as to why the world was the way it was. We are briefly introduced to it, but to me it just did not feel justified, that a few people making mistakes in business decisions could possibly change the world to that extent. I also found it hard to accept, logically, how The Guild's punishment is in essence worse than criminal punishments. People criminally convicted go to gaol and then come out and can live amongst the community and not be "Flawed", whereas the "Flawed" are labelled for life.

However, in saying this I still thoroughly enjoyed the story, the plot, the writing and most especially the characters. This is a fast paced novel, that will have you devouring it's pages. It's plot unfolds fairly quickly, and the writing is well done, and although I wish we got more history about the world, but Cecelia writes in the way that intrigues you enough to keep its readers turning the pages. The characters and their growth is the main highlight for this novel for me.